– As the 12th Global Tiger Day on July 29 approaches, HUYA Inc. (“Huya” or the “Company”), a leading game live streaming platform in China has initiated a series of activities to increase public awareness of wild tiger conservation with the participation of popular celebrities and live streamers, in a mission to help audiences understand the importance of biodiversity and sustainability. The lineup of activities will take place both online and offline.

Huya believes that transforming China into a beautiful homeland with a sound ecological environment is a collective effort that can start with you and me. By dint of being a live streaming platform, Huya will continue to mobilize resources from all walks of life to broaden the reach of public education on wildlife conservation in various innovative ways, such as incorporating content on public good and environmental protection into live streaming events, And, by doing so, make a contribution to biodiversity and sustainability.

These series of activities include the exhibition of videos and posters featuring well-known actors and actresses; live broadcasts by popular streamers on Huya Live, interactive H5 sessions on environmental protection, among other formats. These activities highlight the necessity and urgency of wildlife conservation, while providing in-depth insights regarding the theme of ” Protecting tigers is protecting the ecosystem human survival depends upon; Stand up for tigers and their habitat and help secure a chance for our own future.”

Celebrities including Yang Zi Yu Menglong and Zhang Daxian were invited as advocates who can leverage their influence to give more visibility to the issue of wild tiger conservation. As one of the highlights of these activities, Huya also launches a “Protect Our Home Planet” painting contest, collecting hundreds of works including illustrations, intangible cultural heritage prints, watercolors, cartoons and other creative forms. Among the submissions are professional works from an illustrator studio and by autism artists, as well as amateur works from volunteers, live streamers, supporters and others, with the intent of depicting their viewpoints of how they interpret wildlife conservation. One participating author wrote a note about his submission entitled “Harmonious Home”, stating that “environmental protection is essential nowadays. The best way to keep going forward is to make sure humans and wildlife can live in harmony. I hope we can live harmoniously with wildlife in the global village.”

On July 27 Huya, in collaboration with CWCA, TRAFFIC and International Fund for Animal Welfare (IFAW) hosted an exhibition for the first time, where the quality works from the ” Protect Our Home Planet ” painting contest were exhibited. Sha Yu Yo one of Huya Live’s popular streamers, acted as the exhibition ambassador to interact with the audience, and made their artistic creations on the on-site tents and umbrellas as well as on the sign-in wall, among other activities. 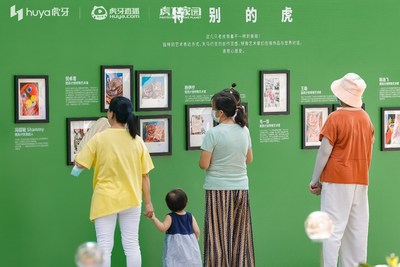 The campaign concludes with a live broadcast on the Global Tiger Day, which starts at 8pm and invites Huya’s popular streamer Zhang Daxian to have an online talk with IFAW Program Manager Ma Chenyue . The talk provides online audiences with expertise on the protection of wild tigers and their habitat through fun interactive activities, such as hand-painting of tigers and online quizzes.

Serving as a comprehensive live streaming platform, Huya has been exploring innovative practices in social responsibility through leveraging its platform capabilities and superior resources. Huya has developed a new “live streaming-empowered” mode for a variety of corporate social responsibility (CSR) genres, including activities of public welfare, environmental protection, support for farmers, anti-fraud guidance, intangible cultural heritage and others.

Among the lineup of genres, activities of public interest and environmental protection are the priorities that Huya has been working on. As an example, the Company partnered with intangible heritage inheritors to create tiger-themed artworks in various formats on Global Tiger Day 2021, including egg-carving and dough modeling, calling for society to protect the King of the Forest. At the annual gala “HUYA Boom Night” in January 2022 Huya launched its “Protect Our Home Planet” Campaign to raise public awareness of preventing and resisting illegal wildlife trade online, and promote harmony between human and nature. In addition, to celebrate Earth Day on April 22 Huya worked with environmental organizations – Northeast China Tiger and Leopard National Park and Giant Panda National Park – to conduct a series of earth protection activities.

Huya also encouraged over 100,000 volunteers to become involved in various environmental protection activities, enriched the platform content on how to increase public awareness of protecting the environment, and strengthened its capabilities in AI and VR technologies to help better identify on Huya platform and protect wild animals and plants.

As part of its commitment to “living in harmony with nature and protecting our planet together” , Huya is working on the establishment of an ecosystem of environmental public good live streaming, with the participation of streamers, platforms, users, volunteers and non-profit organizations. The effort has been widely acclaimed by people and organizations from all walks of life.

Huya will continue to engage the strengths of all parties to promote coexistence between human and nature, encourage more people to join the wildlife conservation movement and make contributions to wild tiger conservation and endangered species recovery.

HUYA Inc. is a leading game live streaming platform in China with a large and active game live streaming community. The Company cooperates with e-sports event organizers, as well as major game developers and publishers, and has developed e-sports live streaming as one of the most popular content genres on its platform. The Company has created an engaged, interactive and immersive community for game enthusiasts of China’s young generation. Building on its success in game live streaming, Huya has also extended its content to other entertainment content genres. Huya’s open platform also functions as a marketplace for broadcasters and talent agencies to congregate and closely collaborate with the Company.